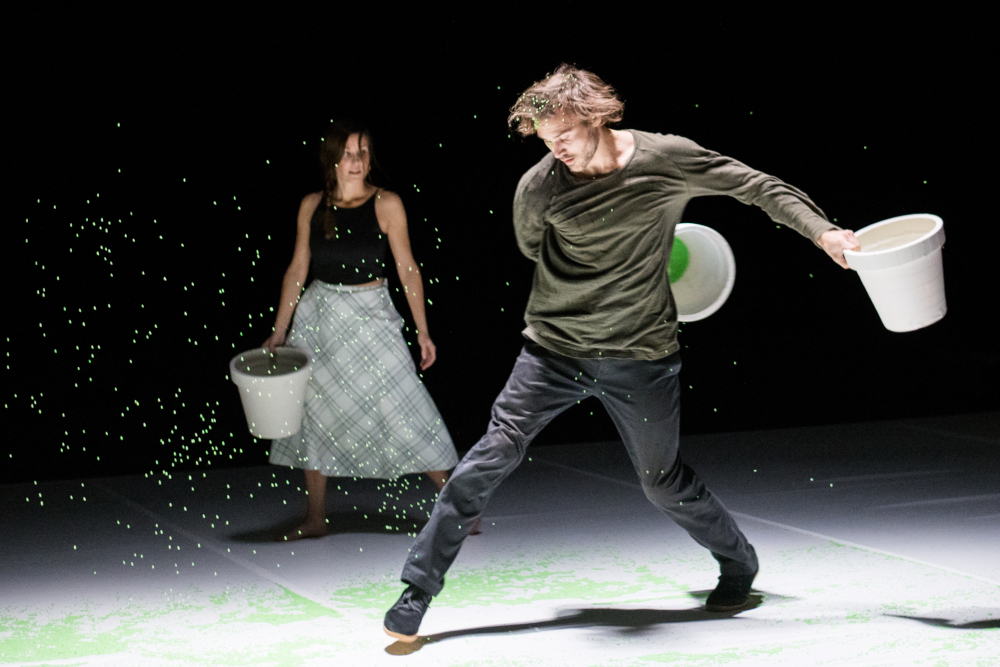 NUUA – HEDE
Hede is a lyrical contemporary circus performance exploring organisms of human interaction. The performance transforms the stage into a visional living room, where object manipulation, juggling and poetry meet in an absurd way. With symbolic floral objects and minimalistic aesthetics the show makes transitions from motion into imaginary – and the other way around. Hede balances between simple elements and complex thinking.
Duration 40min

ARTISTIC INTENTION
Olli Vuorinen juggles with flower pots, plants and other organic and non-organic objects mixing isolation – and balancing techniques with physical theatre. Through her poetry Katri Salmenoja drills into complexities of human interaction building meaning and giving context to the physical. The cross-artistic
dialogue evolves still together with visual artist Teo Lanerva, who creates a tender atmosphere and a visual frame to the performance. Tensions between manipu-
lated objects and theatrical elements communicate seamlessly with poetry and sound.

We wish to invite the audience to a emotional and versatile trip that triggers our visual senses and inspires opening thought prosesses.

Hede is a lyrical contemporary circus performance dusting given ideas on human connection.

NUUA was founded by Finnish circus artist Olli Vuorinen and Brazilian artist Luis Sartori do Vale in 2012 in Finland as company for visual theater and contemporary circus performances.

Nuua is one the Finland’s next generation companies in the field of contemporary circus. In a short period Nuua has taken it’s place in the international scene
of performing arts. Nuua’s first performance ”Lento” (2013) have reached over 35 000 spectators in 10 different countries. The Second piece “Taival” Toured
widely in Europe. The Third performance “Hede” is currentyl touring and fourth piece “Vaarna” is currently under construction. Nuua collaborates together with various international artists around Europe, shares expreriences and brings back to Finland a new taste of circus. What makes Nuuas works interesting is the fact that they are designed and carried out in co-operation with the whole company as collective piece. Assistant director, performers, light designers, sound designer and costume designer combine their different properties and can realize their work in more personal level, making the performances very creative and rich.
www.cienuua.com

KATRI SALMENOJA
is a Helsinki-based artist (MA, BMus) working in the field of lyrical art, music and sound. In her works Salmenoja digs into current themes such as change, oth-
erness and manifold human crossings of today. At the moment she’s exploring interdisciplinary aesthetics of contemporary practices between poetry, movement
and music, writing songs with her electro collective MITE ITEM and composing music with the international collective Sound Illustrators.

OLLI VUORINEN
Olli Vuorinen founder of Nuua company graduated from a French circus school Academie-Fratellini in 2011. After his education Vuorinen did two award-
winning performances in Cirque de Demain-festival and his company got selected in 2012 to a EU-funded Circus Next-project. Since 2011 Vuorinen have been
working closely with one of the pioneer companies of contemporary juggling Les Objets Volants in a performance Liaison Carbone. Past years he have been performing over 20 different countries, his company Nuua has been funded by numerous art foundations and Vuorinen was given a work grant from Finnish art
council.
www.ollivuorinen.com